This is a long post so I hope you'll grab a cup of coffee or tea and hang with me for a few minutes. It's been a busy couple of weeks around here and I have so much to share with you guys.

Living in our camping trailer it didn't feel much like Christmas heading into the holiday. I had no decor up, blew out my shopping in just a couple hours (we went super small as I don't have anywhere to put anything) and haven't baked my annual gifts. We knew going into this adventure things would be a bit different this holiday and it's all A Okay. Really, because we don't need decorations to celebrate our Saviors birth.  We are overwhelmingly blessed and fortunate in so many ways, life is amazing! We did spend Christmas eve at my parents house and had a really nice time visiting with family. My parents home was decorated beautifully. 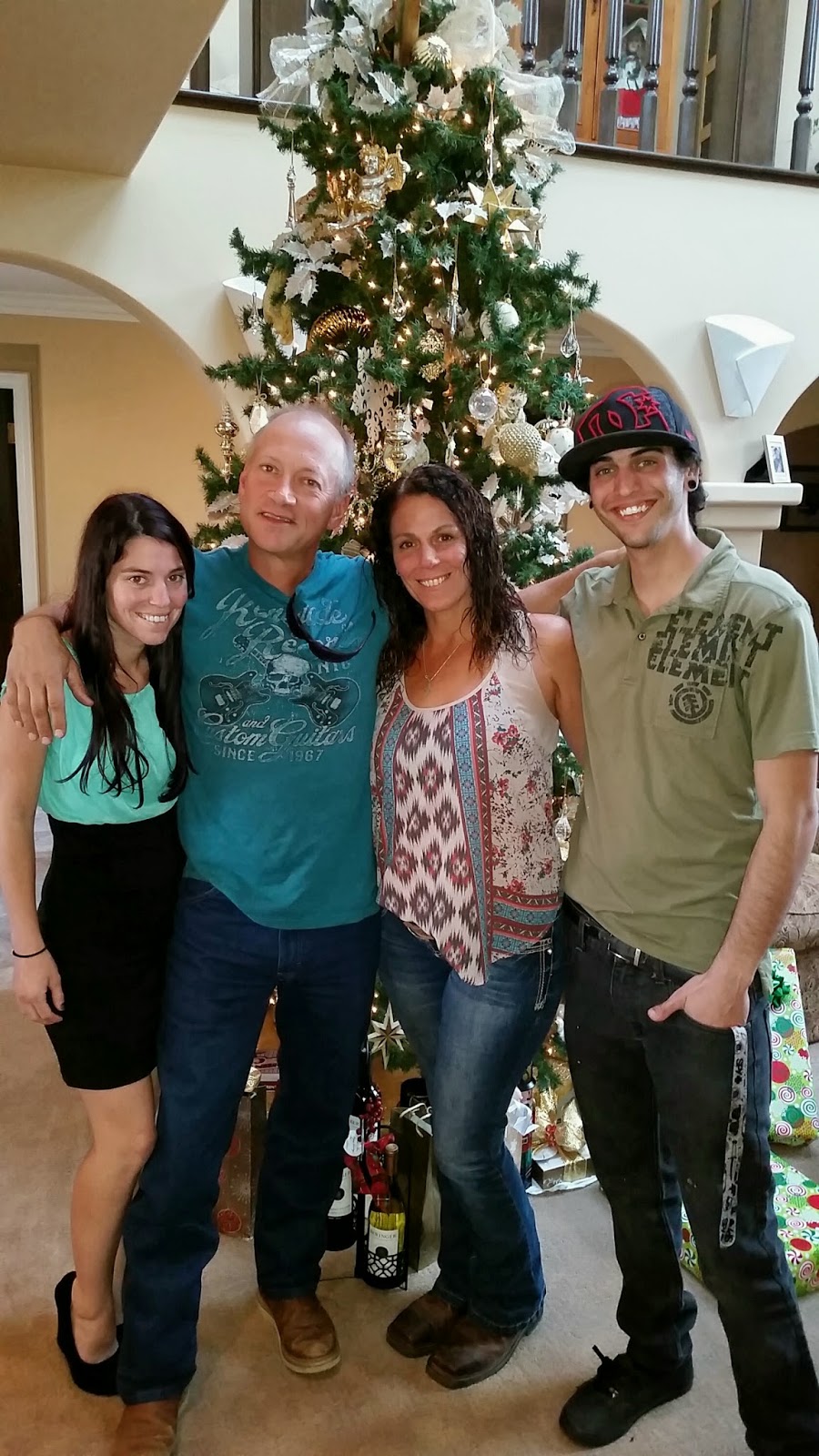 Our rooster Lane is now four months old and trying hard, very hard to let the ladies know that he is now the king of their world. It's not romantic or awesome like the couple in the Titanic movie but he sure is trying.  The older girls are smacking him down with the exception of Goldie Girl, she seems to be his object of ... ahem, affection right now and spends her afternoon running and screaming from him. I've actually had to intervene a couple times to give her a break. Poor thing just finished a really hard molt and he is now rubbing her head feathers off with his beak, ouch.

The rain has been gone now for the last week so we've been drying out and busting out BIG moves to make up for some lost time.  Justin has been here for a few days helping out. We've finished one of the horse shelters roof and sides and are working on the second one as well as finishing fencing our our second line which is super duper long,  yay! 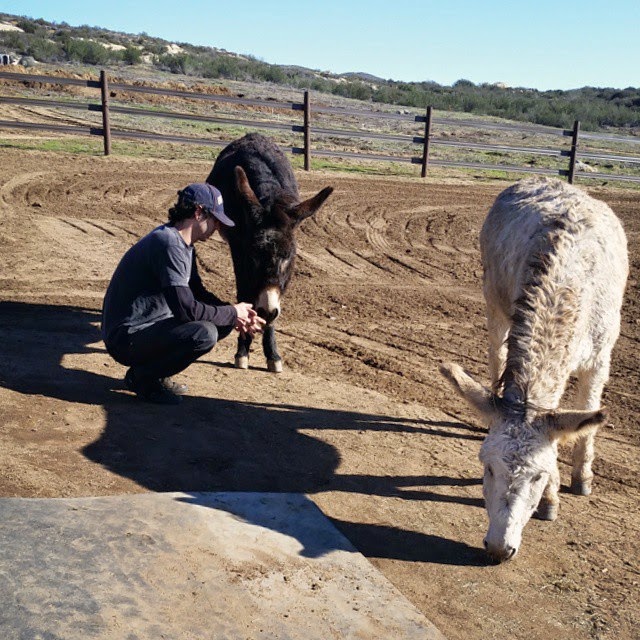 Oh the fencing is endless but we getting closer everyday.  I can see our progress and it feels great. I've been really stressed that the dogs are running around and now adventuring a ways off the property. They need to know their territory and I need to keep them safe, running free range acres and acres away doesn't work for either. 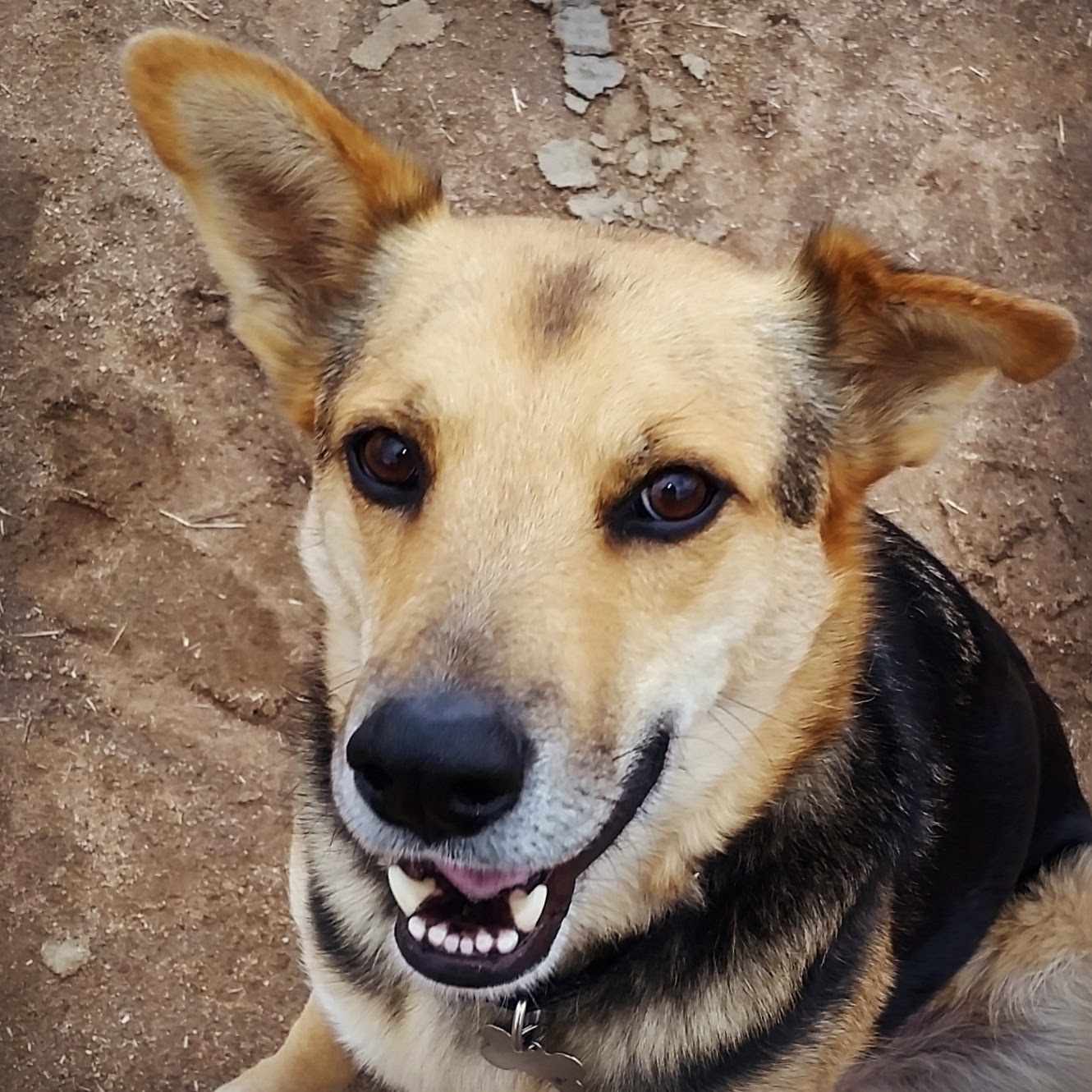 Duke came down with a bug or got into something and was down for a few days but thankfully he's feeling much better and is back to being his happy self... Look at that smile.

Miss Daisy Mayhem is all better and had her sutures removed the other day. I used her time in lock down to work on her training and she's doing well. She is such a smart girl! The separation anxiety has me at a loss though. I have never seen such an extreme case. Hoping time and patience will get us through it. And our newest addition Mr. Harley Man continues to settle in.

We are expecting a really cold storm this afternoon with a chance of snow. It would be fun to have some here since it's such a rare thing but we're not set up for that and are freezing in the trailer already. For the last couple of weeks our mornings have been in the mid 20's outside and in the low 40's inside the camper. I've had to run the generator a lot so the heater can take the edge off. It's all good though and I can't hardly believe we've been camping here for two months already.

Of course like in any adventure there have been some speeds bumps. Two Saturday nights ago we woke up at 1 am to thick smelly smoke, dogs jumping on us and a fire on our kitchen counter. I had kept my emergency ion flashlight in my plastic dish drainer. Not plugged in as we don't have power so it simply sat in the silverware area of the holder for storage. It exploded and caught itself on fire as well as a couple tea candles and Christmas cards we had sitting near it. Thankfully we were able to distinguish it quickly and before it could ignite anything else. Holy Cow it was scary though, phew. We are so grateful it wasn't worse. Thankful we were home when it happened and thankful for our sweet doggies for waking us up.

And you know what else happened around here.... OUR HOUSE was delivered! That sounds so funny huh. Of course it was a total ordeal but those of you following along on our adventure probably guessed it would be lol.

The earth is still really wet here from the recent storms soooooo the house sections, special tractor and semi trucks all got stuck in the mud... Image chains pulling all three huge things through the mud and up the driveway. It really was something to see unfold. Good news it did finally make its way to the pad and looks amazing. We are so excited! There is another crew here for the last week putting the pieces together. Our septic inspection is today. If all goes well we will be in sometime in February, yay!

We hope to have our solar system ordered in the next couple of weeks and I cannot wait. I am very excited to have power and a heater again... Oh and a shower and running water, that would be amazing.

And finally what do you do when living in a camping trailer with 3 dogs and 2 humans? 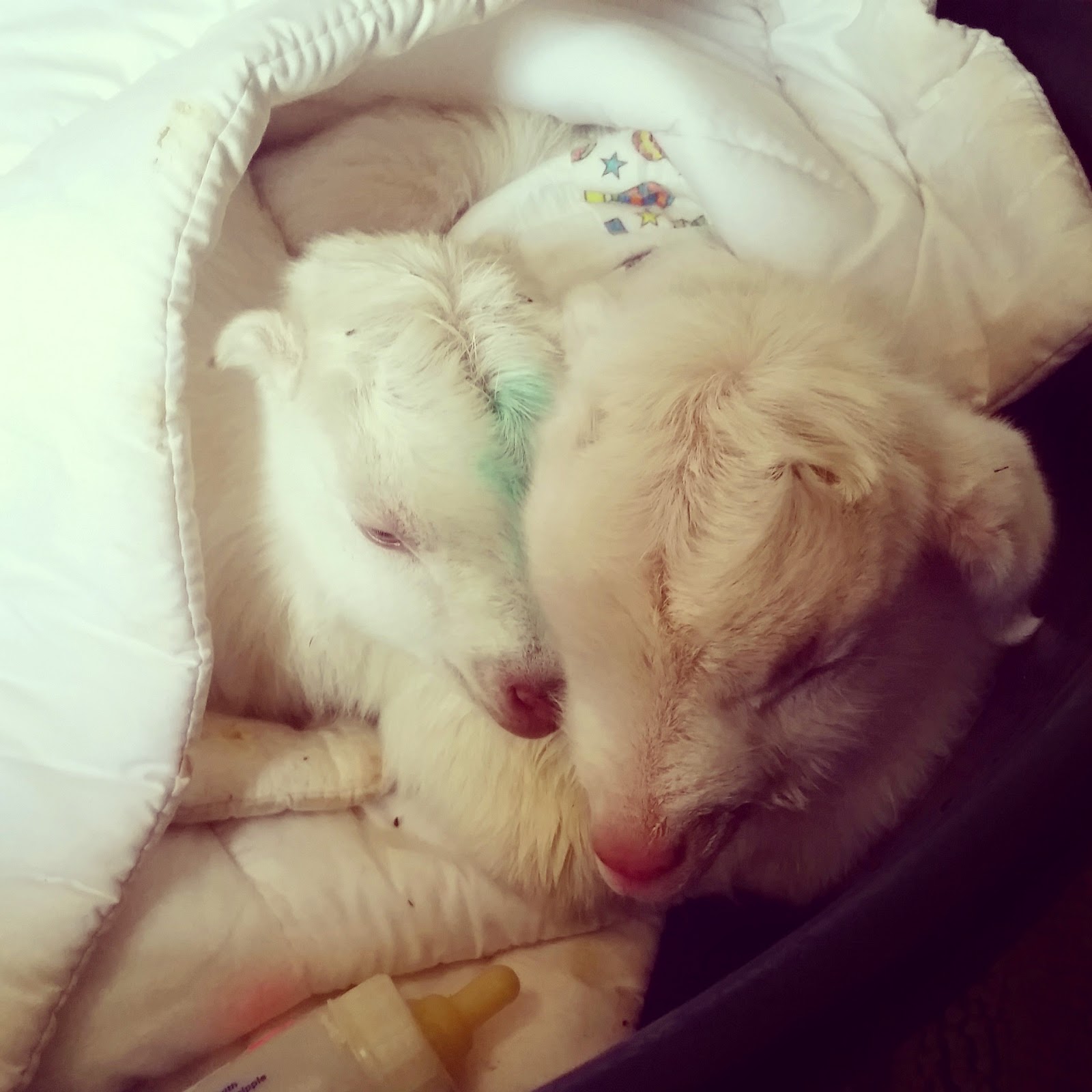 Rescue 2 newborn orphaned goats of course.  One La Mancha baby girl and a lil boy, not sure of breed maybe a Nubian (look at those ears). Instead of kitchen goats I guess we'll call them camper goats for a few weeks anyways.

Hoping your holiday was wonderful and looking forward to catching up with everyone. 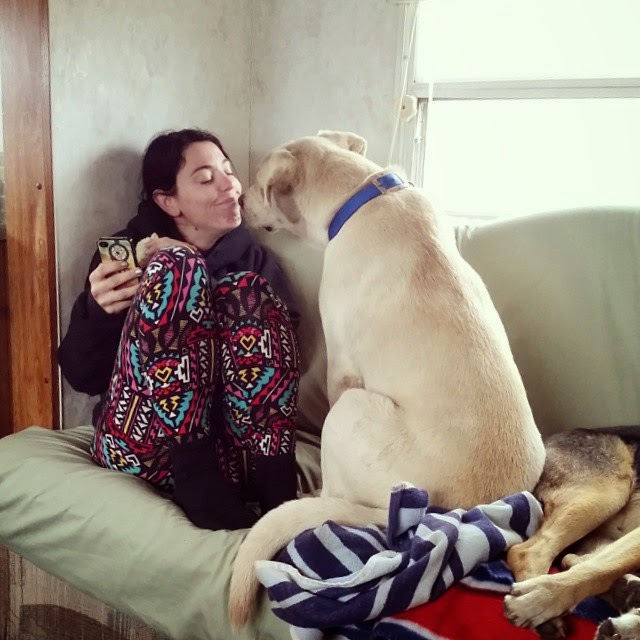 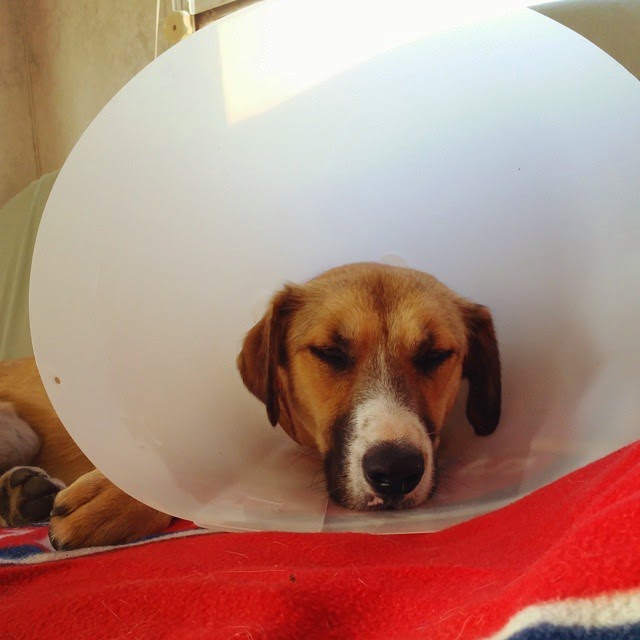 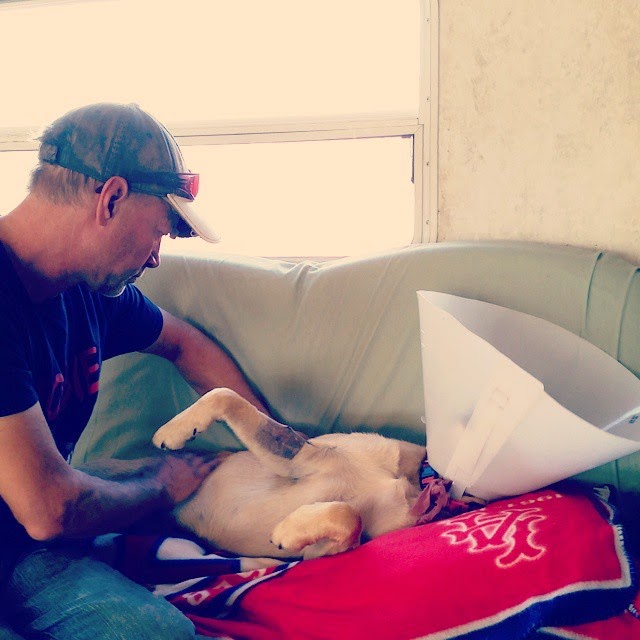 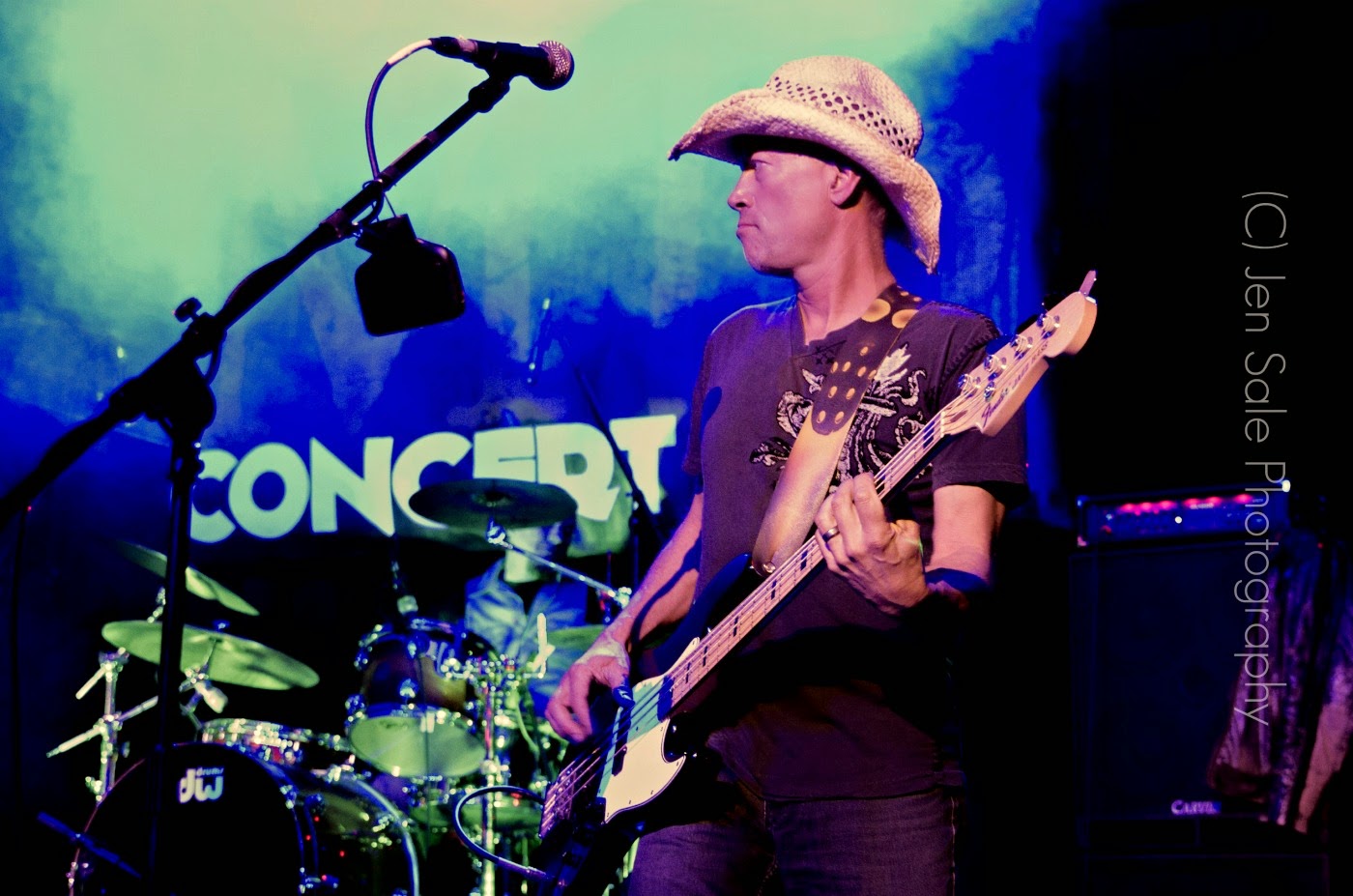 The Music Man turned another year older yesterday.  He's my partner in crime, the Ying to my Yang. The S in our shenanigans, my favorite comedian. My Dreams Do Come True Maker. My best friend, my love and my life partnerand I thank God everyday for him.
Posted by Unknown at 7:18 PM 11 comments: Another neglected and abused soul has found refuge here at the ranch. This sweet boy was put out in a field as a livestock guardian when just a puppy and spent his young life fighting for his own... No shelter, no human interaction and the dog he was with, routinely attacked him as you can see by all the scars on his face.

We will be working on socializing him, building trust and respect. In addition to spoiling him, we are excited to see him settle into his new life where safety, love and Joy live. The progress he has made in just a couple days is amazing and proof all beings know what being safe feels like.

Camping at the ranch has been nothing short of an adventure let me tell you. I still don't have running water, a working refrigerator and I've given up on the cooler thing. It just gets everything soggy and the only power we have is when the generator is on which is really noisy. Did you know you cannot charge computers (laptops) with a generator? I didn't but do now, something to do with the wattage. I'm grateful for all the "things" I've learned on this journey.  I've learned that I don't really miss TV, I enjoy the quiet, I'm enjoying the un rushed conversations with my family and an early bedtime for much needed rest.

I can't believe we've been "dry" camping for six weeks already. Time sure flies when you're working your butt off. Depending on how many surprises we run into we could be half through our time roughing it as we continue to make BIG progress.  More fencing is up, our house is coming in pieces in a week or so, septic system is going in and I'm hoping the horse shelter will be up before Fridays rain storm... Fingers crossed.